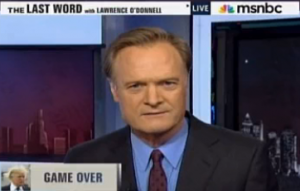 Lawrence O’Donnell didn’t want to say “I told you so,” but given that he has the videotape to prove it, he certainly is entitled to the statement. O’Donnell has been a persistent critic of Donald Trump, and today with Trump’s announcement that he chose Celebrity Apprentice over becoming a candidate, O’Donnell unleashed a stinging critique not just of Trump, but of all political pundits who ever took Trump seriously.

O’Donnell declared that “Donald Trump lied many, many times” and the lie most readily apparent is how Trump repeatedly said he would announce whether he was running for President after the season of Celebrity Apprentice ended. Instead, as O’Donnell predicted, Trump was forced to make his announcement today, at the time and place of NBC’s choosing. O’Donnell concluded, “and so the most monstrous publicity stunt in the history of ego-maniacal TV performer publicity stunts ends with this whimper.”

Yet O’Donnell wasn’t done, given that this “fake campaign” was, in his opinion, a “fraud perpetuated” on journalists and political observers, O’Donnell wanted to explain Trump’s madness:

“He is not self-aware enough or smart enough to be humiliated by anything. He is and always has been a vulgarian who doesn’t have even the vaguest notion of the boundaries of taste and decency.”

That should make for some awkward conversation if Trump and O’Donnell ever bump into one another at the NBC holiday party. Finally O’Donnell suggested that this story was the the “first intelligence test” of the campaign season and warned viewers that they should stop watching or listening to anyone who even for a moment considered Trump to be a serious candidate.

Although O’Donnell shouldn’t be too quick to celebrate that this will be his final segment on Trump. Not only was Trump a great target for O’Donnell’s impassioned arguments, but it also demonstrated his willingness to take on his own employer if the story justified it and his intellectual sophistication in being able to separate himself from the pack of other commentators who were indeed buying whatever it was that Trump was selling.

Watch the clips from MSNBC below: