Lawrence O’Donnell Warns Jon Stewart To ‘Root For Newt’: ‘You Need A Nut To Win’
video

Lawrence O’Donnell Warns Jon Stewart To ‘Root For Newt’: ‘You Need A Nut To Win’ 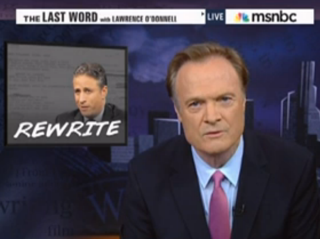 During his last week before vacation, Jon Stewart sat down the Republican Party and staged an intervention to get them to realize just how terrible nominating Newt Gingrich would be for their party. He may have been doing the GOP a favor, but Lawrence O’Donnell tonight had to stage his own intervention with Stewart to remind him of a very salient point: Newt Gingrich makes for great comedy.

Playing the clip from last week’s Daily Show in which Stewart encourages Republicans to vote for someone else, O’Donnell explained that “it is Stewart who needs an intervention. “Look at the polls– if Gingrich goes down, we’re getting Romney. You think you have a year of Romney jokes in you? You don’t.” O’Donnell was very serious about the potential comedy crisis that could come with a Mitt Romney nomination. “Mitt Romney is the worst thing that could happen to comedy in America,” he argued. “I’m telling you, you want Newt,” he told Stewart.

Why? O’Donnell played a clip of Gingrich saying something outrageous– “there is a gay and secular fascism in this country that is trying to impose its will on all of us”– followed by the insistence that “you need a nut to win the nomination.” He finally began to plea with Stewart to “think about your wife, your children, think about what it will be like for them when you come home from another day of writing Romney jokes.” And for his writers, O’Donnell argued, “they know they can’t win more Emmys with Romney jokes!” O’Donnell concluded by dramatically imploring Stewart to “think about what is best for you and, yes, think about what is best for America.”