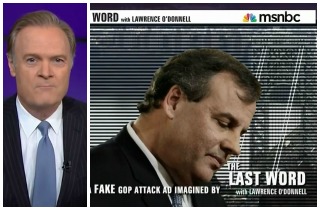 On Wednesday, MSNBC host Lawrence O’Donnell informed his audience that he “wrote” and aired a hard-hitting anti-Chris Christie campaign advertisement based solely on statements the New Jersey governor made during his marathon press conference one week ago. After airing the ad on his program, he proceeded to offer his viewers instructions on how they, too, can create compelling and devastating anti-Christie campaign ads using the GOP 2016 frontrunner’s own statements.

O’Donnell began by establishing the importance of Christie as a political figure and a political target. “So yeah, the national news media is on this case,” he said. “And we’re going to stay on the case.”

The host pivoted to the upcoming GOP presidential primaries and noted that each of the prospective presidential candidates on the Republican side are likely to use the bridge scandal in ads they air attacking the governor.

“They are going to use Chris Christie’s own words against him,” O’Donnell observed. “I’m going to show you an example of how easy it is to do that.”

“I wrote this commercial,” he revealed, “while Chris Christie was actually still doing his press conference.”

He proceeded to air a tough ad that casts Christie in a negative light. “Don’t let Christie embarrass and humiliate America,” the ad’s narrator closes.

O’Donnell said that he was able to write that ad “in a few minutes” and instructed his audience on how to do the same. He went on to broadcast a few lines that would “work perfectly” in campaign ads against Christie.