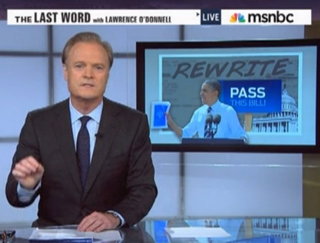 Lawrence O’Donnell doesn’t have very high hopes for the American Jobs Act, the bill that President Barack Obama so passionately stumped for in front of a joint session of Congress last week. It isn’t entirely that he doesn’t believe in the bill, but that his understanding of parliamentary procedure makes clear to him that “it is entirely in the powers of the Congress to rip this bill apart,” and given the bill must necessarily originate in the Republican-controlled House of Representatives, Congress’ output will look nothing like what the President initially proposed.

Noting that “pass this bill” has become something of a slogan for the Obama camp, O’Donnell argued that the reality will look something more like “pass only part of this bill,” or “pass whatever is left of this bill.” O’Donnell noted that the Republicans have been somewhat silent in Congress over the bill– attributing it to fledgling approval ratings– but noted their response was likely to be something to the effect of “obviously we will rip this bill apart and only pass the tax cut parts that we like, and we won’t pass any of the tax revenue increases, and we sure don’t feel like passing any of the new spending increases.”

This, to O’Donnell, didn’t make the Republicans sinister or terrible, as it was constitutionally permitted and encouraged. “It is entirely in the powers of the Congress to rip this bill apart,” he noted. “The procedural rules of both the House and Senate make it virtually impossible to hold this bill together.” This was particularly important when noting that some argued that the Senate would hold the bill together, as they wouldn’t be allowed to touch it until the House was done with it. “Congressional Republicans know what the White House now knows,” O’Donnell concluded. “The bill must originate in the House of Representatives, it has to originate there, because it is a constitutional rule… that all tax bills, all revenue bills, must originate in the House of Representatives.”