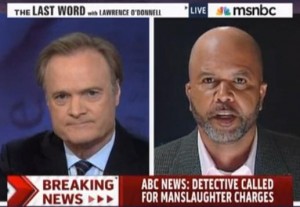 Earlier today, Mediaite’s own Noah Rothman delivered a pretty harsh assessment of Lawrence O’Donnell and Charles Blow‘s interview with George Zimmerman friend and former news anchor Joe Oliver on last night’s The Last Word, even comparing Blow to a Stalinist prosecutor. While their interview style was undeniably aggressive, I believe it was necessary, and achieved what journalism is supposed to achieve: it revealed a multitude of truths.

First of all, it is important to note that Joe Oliver has not been acting simply as a “character witness” for George Zimmerman. A character witness says “I know this man couldn’t have done this,” or “He’s always been nice to kittens and little old ladies,” or “I’ve never known him to hurt even a fly.”

Oliver has, instead, been acting as a fact witness by proxy, offering new details on the shooting of Trayvon Martin, but without any accountability. He begins each interview by saying he’s spoken to George, but that he can’t reveal those conversations. He then proceeds to offer new facts and assertions, without actually assigning them to George Zimmerman, that push a completely new theory of the crime. For example, Oliver never says “when George shot Trayvon,” he says “when the gun went off,” which is nowhere in the version of events that Zimmerman gave police. He has also been saying that Zimmerman stopped pursuing Trayvon Martin when the 911 dispatcher instructed him to, while Zimmerman himself told police he kept chasing him until he lost sight of him. Finally, Joe Oliver has said, repeatedly, that when Trayvon supposedly came up behind George and asked him if he had a problem, Zimmerman “reached for his cell phone.”

Now, where did that detail come from, and why is Joe Oliver including it? This sounds like the makings of some kind of “no fault” defense, where it was all just a big misunderstanding, a Three’s Company plot gone horribly wrong. George Zimmerman was headed back to his car, obeying the police, and Trayvon understandably wanted to know why he had been chasing him, and when he saw Zimmerman reach for his cell phone, decked him thinking he was going for his gun, which he wore on his hip. That cell phone detail is crucial, because if Trayvon Martin saw Zimmerman reaching for, or brandishing, his gun, it would have been entirely reasonable for him to beat George Zimmerman unconscious.

The theory is that they both reasonably feared for their lives, and Zimmerman just lucked out. Whatever you think of this theory, it’s not supported by any of the available facts, yet other media outlets have been allowing Oliver to push it. They’ve also let him get away with outright lies, like his assertion that witnesses have said Trayvon Martin started the fight.

You also have to remember that Joe Oliver is not some ordinary schmuck out defending his pal, he’s an experienced television newsman. That’s why he’s been able to get away with things like telling Chris Matthews that “coon” and “goon” are compliments. His comfort and confidence in that setting is also probably why he hung in there for so long under such blistering questioning.

Lawrence O’Donnell’s ultra-aggressive style doesn’t always serve him well, but in this case, it was absolutely necessary, and it yielded results. Yes, it was “compelling television,” but it was also news.

Here are some of the things that Joe Oliver revealed in that interview:

– Joe Oliver and George Zimmerman were co-workers at Digital Risk, LLC until recently, a fact that Oliver tried to evade during the interview, at first telling O’Donnell “you know, I’m sure that information is out there, but I know where he works,” but finally confirmed late in the interview, saying “we are coworkers since he got his job.”

– It was Joe Oliver who contacted Zimmerman, through his lawyer, “in order to offer my help because of my experience with the media.”

– Joe Oliver says he is not being compensated for his help, including his expenses.

– Asked if Zimmerman’s lawyer set up his conversation with Zimmerman, and if the lawyer participated, Oliver sidestepped the first part of the question. “No, his lawyer did not participate in that discussion.”

As O’Donnell points out later in the interview, this means that Oliver could become a witness in the case, as that conversation would not be covered by attorney-client privilege. “I don’t want to be a witness in this case,” Oliver said.

– In discussing Zimmerman’s 2005 arrest, one of many things Oliver didn’t know about his “good friend,” Oliver immediately supposed that “during that time George may have been drinking,” then quickly added “I don’t know, because as long as I’ve known him, he hasn’t drank.”

O’Donnell says he’s going to get back to that detail, but unfortunately, never does.

– Joe Oliver has spoken to George Zimmerman at least twice since the incident, Saturday and Monday, yet still isn’t sure whether Zimmerman said “fucking coons” or “fucking goons” on that 911 tape. He continues to say “I’ve heard it both ways.”

If Joe Oliver ever does another interview, someone should ask him if Zimmerman denies he said “coon.”

– Elsewhere in the interview, Joe Oliver repeatedly says he knows “this is not a racial incident,” despite saying he’s not sure Zimmerman didn’t say “coons” on that 911 tape. He makes this claim despite revealing, in another interview, that he and Zimmerman never discussed Zimmerman’s racial attitudes.

– George Zimmerman never spoke to Joe Oliver about any of the many times he called 911 on suspicious young black men in his community. “Why would he?” Oliver said.

– O’Donnell and Blow grill Joe Oliver about not knowing a lot of things about George Zimmerman (his arrests, his anger management counseling) that it would have been reasonable for Zimmerman not to have told even a close friend, but Oliver says he also didn’t know that George Zimmerman wanted to be a police officer, and that their conversations  “in general have been about our, you know, our mutual acquaintances, about what’s going on with each other.”

That’s a pretty decent haul of newsworthy points to come away with, especially from a guy who has already been all over TV. Were O’Donnell and Charles Blow too aggressive? If they had simply been interviewing a regular old “character witness,” I’d say yes, definitely, but Joe Oliver was not that. O’Donnell went right up to the line, and Charles Blow arguably stood right on it, but they weren’t taking candy from a baby. They were trying to get the truth, and they did.

Here’s the interview, in two parts: