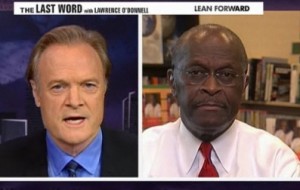 Based on his interview with GOP supernova Herman Cain, a cynical person might think that MSNBC’s Lawrence O’Donnell is trying to push the upstart candidate over the finish line for the Republican presidential nomination. On Thursday night’s The Last Word, O’Donnell conducted an interview that surpassed unfair, sped through the tollbooth at offensive, and came to rest in the parking spot marked “Reserved For Despicable.”

If being attacked by a liberal is throwing gasoline on a fire to the conservative base, O’Donnell just threw liquid oxygen on that gasoline.

Let me start by saying this: I like Lawrence O’Donnell, and not just for his contribution to the ultimate liberal television show, The West Wing. O’Donnell is part of a new breed of liberal commentator who doesn’t talk himself into a corner, and viewers into a coma. He takes strong positions, and expresses them with aggression and clarity.

I also don’t like Herman Cain, for a variety of good reasons, some of which O’Donnell touched on in his interview. His victory in the GOP primary race would be great for America, as it would keep a party, hell-bent on fundamentally crippling the government’s ability to govern, out of the White House for at least four more years.

That’s why my reaction to O’Donnell’s interview with Cain was so shocking. I’m not the kind of person who says things out loud to himself, or to the TV screen, but throughout O’Donnell’s grilling of Cain, I found myself doing just that. “What the f***?…Are you f***ing kidding me?”

Rather than debate Herman Cain on his substantive weaknesses, O’Donnell opted to pull at symbolic threads from Cain’s own personal history. The portion of the interview that will cause most stomachs to churn will probably be when O’Donnell tried to shame Herman Cain for “sitting on the sidelines” during the Civil Rights movement.

Setting aside the fact that this would never be asked of a white candidate from either party, it was the inaction of generations of white people, who “sat on the sidelines” as black people were oppressed and murdered, that made the Civil Rights movement necessary in the first place. As anyone who lived through that era will tell you, just being black in America at that time was a militant act that carried perils that Lawrence O’Donnell will never know. He’s in no position to question, or judge, the miles walked in shoes he will never put on.

To me, though, the most sickening part of the interview was when O’Donnell tried to twist what Herman Cain’s father told his son in an attempt to keep him safe from the murder and oppression that O’Donnell invoked. I suppose it would have been fair to ask how the caution that Cain’s father instilled in him affected his choices, but O’Donnell despicably framed the elder Cain’s instinct to protect his child as racial cowardice:

Now, there are people with standing to question the advice Cain’s father gave him, but I doubt there were many parents during the Civil Rights era who were anxious to see their own children martyred, even to a cause they supported. Lawrence O’Donnell will never have that standing.

Cain handled the whole thing with surprising grace, and was aided by an off-camera cheering section at the Texas Barnes & Noble from which he was being interviewed. He finished off O’Donnell when the host went fishing for a “draft-dodger” meme, only to have Cain inform him that he had served his country during Vietnam, as a civilian employee of the Navy, who felt he was more valuable in that capacity.

O’Donnell owes Cain an apology, even if the effect of this interview is to make Herman Cain an even greater hero on the right. Maybe Rick Perry’s campaign ought to get on the phone to O’Donnell’s booker.