LEAKED VIDEO: Sandra Smith Gasps at Fox News Panelist’s Claim That the Network’s Call of the Election Should Be Disregarded 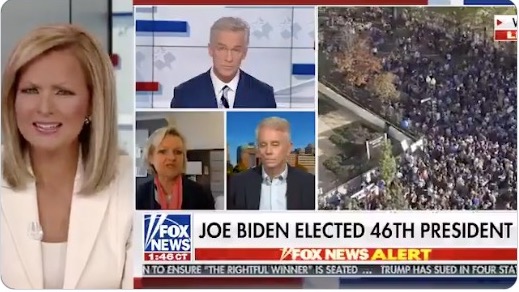 Fox News anchor Sandra Smith has established her journalistic bona fides over the past few months of the election, consistently pushing back on baseless or unverified conspiracy theories, many of which come from either the Trump campaign or his media surrogates. The following clip—which apparently came from a leaked raw feed of America’s Newsroom—is likely to endear her to viewers who prefer to watch a reliable news outlet.

The clip in question — which comes from Internet-video maven Timothy Burke — comes from a rare Saturday episode of Fox News’ midday news program America’s Newsroom, which was on during the weekend due to breaking election news. Guest Cleta Mitchell, a DC-based lawyer argued on behalf of President Donald Trump’s reelection efforts despite his opponent, Joe Biden, having just being projected the winner by Fox News and numerous other media outlets.

“Remember, just because CNN or even Fox News says who’s president doesn’t make them president,” Mitchell noted to co-host Trace Gallagher. “So I think everybody wants to know this was done properly and legally and that we can trust the results. And I think we have to look at every one of these concerns.”

“Yeah,” Gallagher replied, “I think that’s a very good point there.” Watch below:

Sandra Smith, off-air, reacts to her colleague Trace Gallagher indulging a nutjob who denies the outcome of the election even after Fox News had called it for Joe Biden: pic.twitter.com/gZ4nrnVHab

But Smith was literally taken aback by Mitchell’s comment. “What?!” she replied, then later adding “What is happening? Trace, we’ve called it.”

There appears to be some confusion about the news media’s long-standing tradition of projecting a presidential winner — which has happened every four years in the modern news era, and the specious claim that the media has “declared” or anointed the new president. They haven’t.