Lean Forward… Collectively: Melissa Harris-Perry’s MSNBC Ad Says All Of Your Children Belong To Us 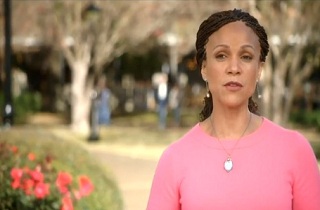 The latest MSNBC “Lean Forward” spot featuring Melissa Harris-Perry is a collection of tired progressive cliches on steroids that harken back to the Clinton era. It really outdoes all previous “Lean Forward” ads.

The 30 second spot features Harris-Perry standing on a curving street near some pretty flowers and speaking in the matter-of-fact style that helped land her a weekend show on the progressive cable outlet. There’s so much about this short spot that’s just troubling and wrong that we have to break it down piece by piece.

Yeah, no. We spend more on education per-student than every country in the world according to the latest OECD Education at a Glance report. If you want to twist the numbers more and view our spending as a percentage of our GDP we come in a very close fifth behind Denmark, New Zealand, Iceland, and South Korea. So Harris-Perry’s allegation that “we have never invested as much in public education as we should have” is totally false. In order for it to be remotely true we’d have to spend a significantly smaller amount of money on education than we currently do. Not only do we invest more than enough but we still manage to get pretty terrible results despite all the money we throw at education.

There’s some startling stuff in there. Kids don’t just belong to their parents; in Harris-Perry’s world they belong to the collective whole, the community. They are the responsibility of everyone. She is right to some extent on this concept. We are forced to pay for the education of minors in our communities through some form of taxation. If we choose to abstain from paying these taxes we, well, lose our homes and end up in jail. So, we are forced into some level of collective action to take care of our neighbors kids even if we don’t want to. I think most Americans, particularly parents, are quite alright with the level of collectivism that they are currently forced to engage in and probably don’t want to live in Harris-Perry’s fantasy-collectivist dream world where the lines of parent, neighbor, and state all blur together into some nightmarish borg.

Earlier in her career, during a more gentle time, she was less open to the collective dictating household decisions on things like reproductive health and marriage arrangements. It appears now that Harris-Perry has come around to fully believing that, yes, only good things can come through collective action even when they intrude on private household decisions like child rearing.

Once it’s everybody’s responsibility and not just the household’s we start making better investments.

Again, the collective “responsibility” of raising children has already been technically forced on everybody through taxation. The investments she is vaguely talking about have already been made repeatedly and they are often gold-plated, too. This broader collective theme of child rearing she has should be roundly rejected by all sane people. Pooling community resources together to educate our children, even if it is done by force, is one thing but suggesting that we need to dissolve the traditional bonds between parent and child for the good of the greater collective is off the charts crazy.