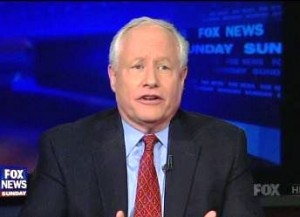 On Fox News Sunday this morning, Weekly Standard editor William Kristol defended former Secretary of State Hillary Clinton from partisan political attacks over the tragedy in Benghazi, while also urging non-partisan investigations into that incident and the IRS’ targeting of conservative groups during the 2012 election. Kristol denounced American Crossroads’ anti-Hillary ads, asking “What is the point of that?” and calling them “ridiculous.”

“There’s no campaign going on,”Kristol continued, adding “Let’s pull the partisanship back. It’s genuine outrage. There should be bipartisan committees investigating both from Congress. So I wish the Republicans would just be quiet for a while, the groups that are fund-raising, would be quiet on both issues for a while, and find out what really happened.”

Kristol’s willingness to defend Hillary Clinton could portend some dissension among conservatives about attacking the former Defense Secretary in the months and years leading up to 2016. Her intense 2008 fight against Barack Obama’s nomination made her a somewhat popular figure with many conservatives, and her non-polirtical work at State served to reinforce that.

Juan Williams added that “unlike Benghazi,” the IRS issue “is a real problem. You cannot politicize and political politically intimidate your opponent by using the IRS, for those of us who have been around, this is Nixon.”

According to the IRS, though, the misconduct was restricted to “low level” staffers in Cincinnati, and the White House has pointed out that the Internal Revenue Service is an “independent agency.”