‘Leave Me Alone About Romneycare!’ Maddow Snaps At Nick Gillespie And Bill Maher Over Health Care 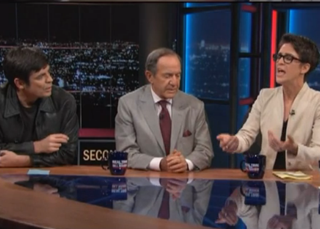 Real Time was a pretty heated political arena last night, but the fun didn’t stop last night with Rachel Maddow taking personal umbrage over Nick Gillespie trying to figure out if there was a single Republican policy she agreed with. The second half of that debate included a heated debate about labeling genetically modified foods, the dangers (or lack therof) of fracking, and Maddow yelling at everyone to “leave me alone about Romneycare!”

After the conversation on Fast and Furious, Bill Maher asked his panel about alternative energy, bringing in actor Mark Ruffalo. Gillespie noted that more conventional fuel sources were easier and more efficient to use than alternative energy, which Maher scoffed at. “That’s like saying in 1990, ‘horses are here, what are we doing with this motorized buggy?'” The conversation then turned to other health risks– namely, in genetically modified foods. Gillespie argued corporations should not be obligated to label foods as genetically modified, which the entire rest of the panel disagreed with, though Maher uncharacteristically took the opportunity to attack the “villain here,” President Obama. “Obama said in 2007, we would label genetically modified food,” Maher argued, and instead hired a Food Czar with ties to corporations, a move Maher likened to “putting Jerry Sandusky in charge of Chuck E. Cheese.” Gillespie argued that “when consumers want that information, it is provided,” without government intervention.

Maher then opened the scope of the conversation to discuss health generally and, particularly Obamacare and its cousin, Romneycare. Maher was appalled at the way Democrats sold the Affordable Care Act. “The way they should have sold this is ‘We’re going to make those freeloaders in the emergency room pay,’ that’s how Clinton would’ve sold it!” On the subject of Romneycare, Gillespie asked Maddow whether she approved of the policy. “You don’t know anything about me,” she responded, “you should start making arguments from places other than ‘this is something I assume about you.'” When Maher asked her the same question, Maddow rejected it from both: “leave me alone about Romneycare, all of you!” She then argued that her job was “to cover these things, not to tell you how I like them or not.”