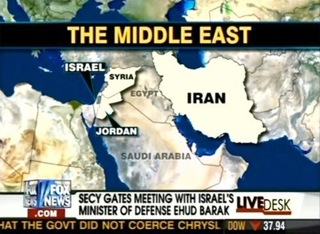 “Some News Leaves People Knowing Less,” blares a headline from the political science department of Fairleigh Dickinson University in New Jersey today. The University conducted a survey of several hundred New Jersey residents and found some numbers that are very convenient for the enemies of a certain news organization– Fox News viewers were 18% more likely to be either misinformed or uninformed about certain current events.

RELATED: Study Finds That The “Sexier” The Anchorwoman Is, The Less A Male Viewer Remembers

The study (results of which can be found here) asked respondents about a number of current events, from the 2012 Republican election to the revolts in the Middle East, and asked respondents where they received their information. It controlled for education levels and partisanship. Sunday talk shows ranked highest among capacity to inform, but when it came to Fox News, the study claims, it seemed to have left viewers with less information than those who don’t watch news at all:

In the most recent study, the poll asked New Jerseyans about current events at home and abroad, and from what sources – if any – they get their information. The conclusion: Sunday morning news shows do the most to help people learn about current events, while some outlets, especially Fox News, lead people to be even less informed than those who they don’t watch any news at all. […]

There are also a few other interesting numbers in the study: 11% of those polled think that Occupy Wall Street is a Republican-led movement, for one, and of those, most are far likelier to watch MSNBC. Only 55% of New Jerseyans could identify the frontrunners in the Republican presidential race at the time of the poll (Mitt Romney and Herman Cain), and the most likely to be informed correctly generally were viewers of The Daily Show With Jon Stewart. Other positive sources are New York Times and NPR, and talk radio generally.

The study is being heralded by the usual suspects as proof that Fox News many foibles (like this map of the Middle East, screencap via) is actually more damaging to all Americans than not watching any news at all. Of course, most of these are ignoring the fact that of this extremely select group, the MSNBC viewers were entirely confused about Occupy Wall Street for some reason– and, of course, are ignoring the fact that said foibles are natural in the television industry (and in print, and in talk radio), and forgivable if kept to a minimum.

And, more importantly, they ignore at their peril the questionable academic work that went into this study, and the questionable language used by the professors that may be a red flag as to how much they are exaggerating the importance of their work. Take, for example, Professor Dan Cassino calling the finding”that only about half of the public can name one of the front-runners is embarrassing.” Yes, that would be embarrassing for the American public– if half of 612 people in New Jersey, a state that represents about 0.002% of the American public, were representative of them. Given the extreme limits of its geographical range and the negligible number of those polled (a whole 612 people), it is difficult to see this study as irrefutable evidence of anything, and perilous to promote it as such for ideological benefit.