Legislator Behind Arizona Bill: ‘9/11 Would’ve Been Averted’ With Immigration Reform 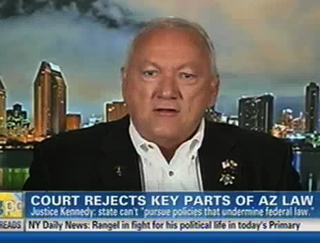 Former Arizona State Senator Russell Pearce was the driving force behind the controversial SB-1070 bill the Supreme Court ruled on yesterday , and on Starting Point this morning, justified the legislation and the Supreme Court’s ruling on the “critical” section of it. “The deaths and costs in millions of dollars is worth it for them” he told Soledad O’Brien of opponents of the bill, adding that, with proper immigration reforms, “9/11 would’ve been averted.”

O’Brien first asked him how the constitutional portions of the bill will work in practice, which Pearce, who was recalled and removed from his state senate seat over the bill, explained that a stop under the bill will function “just like any other stop… it allows them to ask the questions they need to ask.” Margaret Hoover then stepped in to ask how the bill is reconciled with the fact that the Supreme Court “basically reaffirmed that it is the Constitutional responsibility of the federal government to enforce immigration.” Pearce argued that Congress had not preempted the states or used any of their power to disagree. “Had Congress wanted to preempt this state, they could have used their plenary power,” he argued, adding, “to the cheap labor, the cheap voter crowd, it’s ok… the deaths and costs in millions of dollars is worth for them.”

Pearce argued that with comprehensive immigration reform, “9/11 would’ve been averted. Four out of the five main hijackers were stopped by law enforcement and let go and were in the country illegally… apparently, that’s okay to the left.”

O’Brien replied that she considered his comments an articulation of “the frustration and out and out anger out there,” but asked whether he saw a problem with racial profiling on the horizon. “That’s demeaning to law enforcements,” he replied.