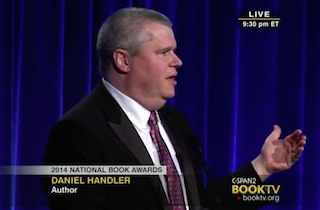 , has spent most of this week apologizing for a joke he made at the annual National Book Awards ceremony that involved an African-American author, Barack Obama and watermelon.

Handler took the podium after author Jacqueline Woodson won the award for young people’s literature. “I told Jackie she was going to win, and I said that if she won, I would tell all of you something I learned about her this summer,” he said, before revealing that she is allergic to watermelon. “Just let that sink in your mind.”

He then said that Woodson suggested he put that piece of information in one of his books, to which he replied, “I’m only writing a book about a black girl who’s allergic to watermelon if I get a blurb from you, Cornel West, Toni Morrison, and Barack Obama saying ‘This guy’s OK. This guy’s fine.'”

After facing the inevitable backlash on social media, Handler issued an apology on Twitter:

My job at last night's National Book Awards #NBAwards was to shine a light on tremendous writers, including Jacqueline Woodson… -DH [1/2]

…and not to overshadow their achievements with my own ill-conceived attempts at humor. I clearly failed, and I’m sorry. -DH [2/2]

The next day, he announced he would be making a $10,000 donation plus matching further donations up to $100,000 to a campaign that aims to increase diversity in literature:

My remarks on Wednesday night at #NBAwards were monstrously inappropriate and yes, racist. -DH [1/4]

It would be heartbreaking for the #NBAwards conversation to focus on my behavior instead of great books. So can we do this? -DH [2/4]

Then, he gave one last plug to Woodson’s award-winning book, Brown Girl Dreaming

Brown Girl Dreaming is an amazing novel and we need more voices like Jacqueline Woodson. -DH [4/4]