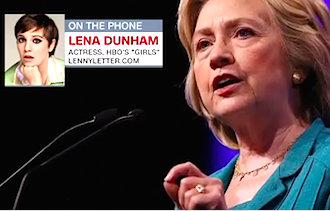 After teasing an excerpt of her upcoming interview with Hillary Clinton — in which the Democratic frontrunner says she is “absolutely” a feminist — Girls creator and star Lena Dunham called into CNN Thursday afternoon to share some more details of their conversation and her feelings about the candidate.

“Really what we wanted was just to present Hillary — outside of being just a presidential candidate — as a feminist role model, as someone who represents so much of what is interesting and challenging and unique about being a woman in America at this time,” Dunham told CNN’s Kate Bolduan. “And I do think we expect really different things, in terms of likability from our female candidates, than we do from our male candidates.”

When people use terms like “warm” and “likable” and “relatable” in relation to Clinton’s campaign, Dunham said those are “frustrating terms” to her because “they seem really gendered.”

Asked by Bolduan to give Clinton advice on how she can better relate to young, millennial women, Dunham would only say that in the interview she conducted with the candidate, Clinton was able to express a mix of “honestly and candor” but also “vulnerability” that we have not seen elsewhere on the campaign trail.

Finally, Dunham did confirm that Amy Schumer — who also crashed Clinton’s interview with Ellen DeGeneres — will be making a cameo in the new interview, which will be available on Dunham’s new website LennyLetter.com in the near future.