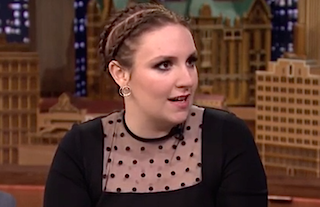 It’s been close to a year since Lena Dunham made a major splash at Howard Stern’s 60th birthday party, firing back at his description of her as “a little fat girl who kind of looks like Jonah Hill,” by saying he looks like a “cartoon of a Jewish female horse.” And she still can’t stop talking about the “inspiring” experience.

“I went in, you know, excited for the spectacle,” Dunham told Jimmy Fallon of the event last night. “I didn’t think I was going to cry with joy and be so moved by his life’s work and his relationship with Robin Quivers. I lost it.”

“It was beautiful,” she continued. “It was a celebration of a man who’s truly made a difference and if you’d told me I was going to say that five years ago I would have slapped you in the face.”

“I really care about Howard,” Dunham added. “I really think he’s, like, a voice for important causes. I think he’s an outspoken feminist. And again, these are words I’m like, ‘What am I saying? Who am I?’ But yes, he’s one of the people who really speaks out on issues that matter to me and matter to a lot of women and I think that we should be thankful that he’s in the world.”

Dunham did not name any of those specific issues, but she did point out that Stern is the same man who brought the Sybian to the radio.