Leno Asks Bristol Palin Why Her Mom Shouldn’t Run, Don Rickles Zings ‘Because She Could Lose!’ 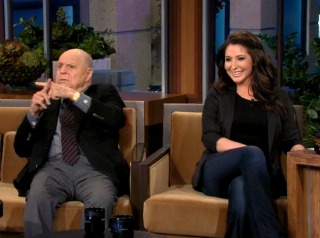 Bristol Palin‘s appearance on The Tonight Show started off with a bang, with Palin poking fun at host Jay Leno‘s signature feature — his chin — after he subtly asked her about her new, surgically enhanced visage. But it was Leno’s other guest, Don Rickles, who really got the party going, as Don Rickles is wont to do. A word of warning: Don’t invite this guy to your bachelorette party unless you’re prepared to do something regrettable involving an inflatable alligator.

Rickles went utterly berserk when Palin recounted the story of sneaking out of her home and losing her virginity while drunk. Later, Leno asked Palin if she knew her mother’s decision on whether or not she’d be running for President. The younger Palin had gotten into a bit of trouble for her previous comments about this very topic but, this time around, she kept relatively mum:

You know, I don’t know. It’s something that we’ve definitely addressed, but it’s just up to her, ultimately.

When Leno followed up by asking if there was any reason Sarah Palin shouldn’t run, Rickles jumped in immediately: “Because she could lose.”

Rickles continued injecting humor into an otherwise mild interview by dramatically rolling his eyes when Leno asked whether Sarah Palin’s kids were “stunned” when they discovered their mother had been chosen to be John McCain‘s running mate in 2008.

Now, we previously hoped that, based on their chemistry and banter, Ed Schultz and Micheal Steele would get a show together. And that’s inching ever closer to reality. So, now: Can Rickles and Palin have a show together? Pretty please?

Watch the clip, courtesy of NBC: