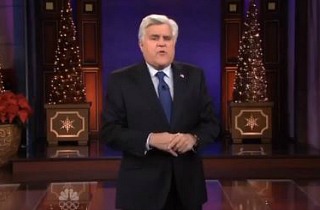 During his Friday night monologue, late night comedian and host of The Tonight Show, Jay Leno, took a series of swipes at President Barack Obama. Leno tore into the president’s failure to live up to his initial expectations, the National Security Agency’s scandals, and the persistent issues plaguing the Affordable Care Act.

The comedian began by identifying a variety of similarities between Obama and Washington Redskins quarterback Robert Griffin III.

“To which, President Obama said, ‘Tell me about it,’” Leno tagged.

He went on to mock the NSA, saying that the president traveled to South Africa this week in part to attend a memorial service for the late Nelson Mandela where it “felt strange” to listen in on world leaders in person.

He spread the mockery around to Republicans as well. Turning to Rep. Steve Stockman’s (R-TX) decision to attempt to defeat Sen. John Cornyn (R-TX) in a primary fight, Leno quoted the congressman who recently said that more people suffer with chlamydia than have signed up for the ACA.

“You know what Obamacare and chlamydia have in common?” Leno asked. ”You can’t get either one online.”

“Actually, that’s not — that is not a legitimate comparison,” he continued. “To be fair, there’s no fine for not getting chlamydia.”