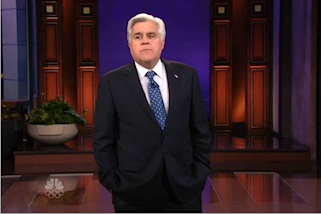 At the end of a long week of government shutdown stalemate, Jay Leno opened the Tonight Show Friday night by tearing into Congress and President Obama in particular for failing to come to an agreement that would get federal employees working again. Below are some highlights from Leno’s brutal monologue.

“This government shutdown thing is getting old. The national parks are closed, the museums are closed, federal agencies are closed. But our borders? They’re wide open, don’t worry about that.”

“China is really upset about the government shutdown. Well sure, they’ve never had one of their businesses fail before.”

“Actually, it’s the perfect time for him to go to Asia. I mean, what better time to leave Joe Biden in charge of the country than during a a shutdown? He couldn’t do any more damage. right?”

“The shutdown is so bad, Nancy Pelosi may be forced to keep this face for another year. That’s how bad it is.”

In addition to the standard monologue jokes, Leno also took on the MSNBC reporter who had so much trouble signing up for Obamacare online. But in his version of the video, things went bit further with Mara Schiavocampo taking out her angry directly on the machine itself.