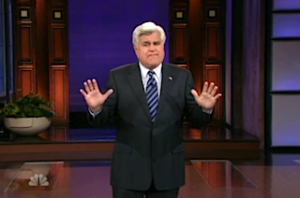 Jay Leno opened his Tonight Show monologue Tuesday night with three solid minutes of jokes aimed squarely at President Obama and his administration for what he evidently sees as a less-than-effective handling of the Syria situation. For good measure, Leno threw in a crack about the unemployment numbers and even a birther joke at the president’s expense.

Leno, who taped his show before the president delivered his prime time address on Syria, began by turning an innocuous comment about the weather into a cutting remark about Obama. “You can tell fall is coming to the east,” he said. “The leaves are changing faster than the White House position on Syria. It’s unbelievable.”

On John Kerry’s diplomatic capabilities, Leno joked that the secretary of state “has given Syria one week to hand over its chemical weapons. And if they don’t, he’ll give them another week. So that’s kind of where we are right now.”

The host did manage to work in one joke at Bashar al-Assad’s expense, noting that a poll found that Americans were twelve times as likely to click on story about Miley Cyrus as they were to click on one about Syria. “Well, that makes sense,” Leno said. “Wouldn’t you rather watch a a twerk than a jerk?”

But soon, Leno was back to the Obama Administration, saying the only “good” thing to come out of this crisis is that Vice President Joe Biden has remained quiet on the matter. And to top it all off, Leno went for the birther jugular. “President Obama’s foreign policy is taking a a beating, especially abroad,” he said. “They’re not as excited about him as they used to be. In fact, people in Kenya are saying, ‘We’re positive he wasn’t born here.'”