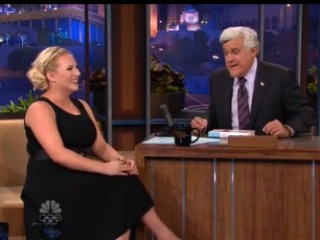 Columnist and author Meghan McCain stopped by Jay Leno‘s show Tuesday night to promote her latest book, America, You Sexy Bitch, admitting her dad, Senator John McCain, wasn’t exactly thrilled with the title. And what of its contents?

“Now, in the book,” said Leno, “you talk about all kinds — legalizing marijuana. That seems really Republican.”

“Yes, I come out for legalizing marijuana in this book,” she confirmed. “I was living in Los Angeles very briefly last year and I was shocked at how people here smoke weed the way people in New York pour wine.”

Later, when talk turned to the issue of gay marriage and President Obama recent comments concerning his “evolution” on the issue, McCain shared that, “unless he’s going to get behind any legislation — I think talk is cheap.”

“So, as a Republican,” Leno asked, “is Romney on the wrong side of that one?”

“Oh, yes,” McCain replied, adding that anyone who isn’t coming out in favor of same-sex marriage at this point “is fighting a a losing battle.”

Leno then asked about equal pay, prompting McCain to share that “I don’t know why we’re even having conversations about banning birth control at this point. But, I’m a republican, but I’m a a controversial one.” Both then agreed that, while Republican, McCain is definitely socially liberal. She bemoaned the lack of cooperation and bipartisanship in Washington, sharing that it’s one reason why she writes “irreverent” books about politics to attract a new breed of younger political thinkers who might be fed up with the way DC runs.

When talk turned to Mayor Bloomberg’s sugary drink ban, McCain shared that “my favorite thing about this is Governor Cuomo is trying to pass a bill in New York that says if you’re caught with certain ounces of marijuana that it’s okay unless it’s over a certain amount. I think it’s 32 grams. So technically, I could be caught with a joint in New York and be fined $100, but if I’m caught with a a Slurpee, it’s $200.”

After chiding Leno for “getting her in trouble” over questions regarding what, exactly, makes an ideal VP candidate, McCain explained her experience writing a book and visiting a strip club with “borderline socialist” comedian Michael Ian Black.

Have a look at the interview, via NBC: