Lesley Stahl Grills Pence: How Can You Support Trump if You Hate Negative Campaigning? 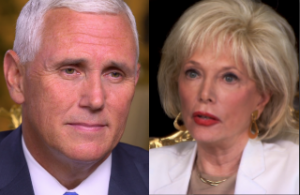 CBS released a preview of their interview with Donald Trump and Mike Pence, where the Indiana governor was asked an aspect of Trump that he showed deep disagreement with before they joined forces

Beyond Trump’s reported hesitance in deciding on Pence, the GOP nominee’s VP choice is surprising when one considers how Pence stands opposite to him on a variety of issues. Pence has been trying to patch things up over the past two days, but in their 60 Minutes sit-down, Lesley Stahl asked him about whether he condones Trump’s incredibly negative campaign after having prominently spoken out against political mudslinging.

Pence seemed to dodge Stahl’s question, saying that “this campaign and Donald Trump’s candidacy has been about the issues the American people care about.” Stahl repeatedly pressed Pence on this, but Trump jumped in…and immediately took the interview in a negative direction.

“We’re different people. I understand that,” Trump said. “I’ll give you an example: Hillary Clinton is a liar.”

“I didn’t ask him to do it, but I don’t think he should do it because it’s different for him,” Trump said.