CNN––lover of all things virtual––is taking things to the next level tomorrow night by giving viewers the opportunity to watch the first Democratic debate in virtual reality. Yes, you’ll be able to feel like you’re really there in the room with Hillary Clinton, Bernie Sanders, and other people you haven’t bothered to learn the names of yet.

CNN is all in on showing off this technology, for as Chris Moody explained to Brooke Baldwin this afternoon how the virtual debate will work, footage of a model played on the other side of the screen demonstrating how cool you will look watching the virtual debate: 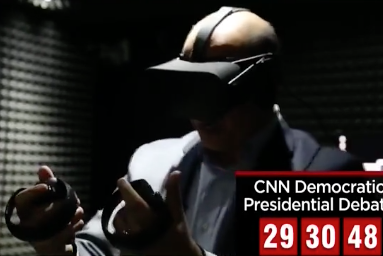 (Yep, that was me on the right side of the @CNN TV screen, a model wearing virtual reality gear)

Forget my husband looking down at his phone
This is him literally in his own world pic.twitter.com/JMwTeECH98

The future is awesome but also kind of terrifying?

Watch the video above and I defy you to question how cool it would be to watch the debate like that, via CNN.

Hey, @Mediaite, my VR try-out was actually for this interview with @Oculus founder @PalmerLuckey! http://t.co/DsMJfG1yue

Stelter’s interview above with Oculus VR founder Palmer Luckey actually provides interesting information about the technology, so watch that if you actually want to learn something and not just join in the snark.