‘Let Me Finish!’: Don Lemon Goes At It with KY Republican over Kim Davis
VIDEO

‘Let Me Finish!’: Don Lemon Goes At It with KY Republican over Kim Davis 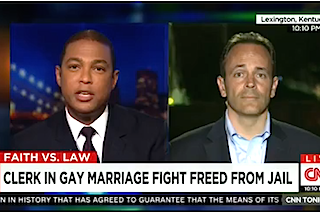 Don Lemon opened his CNN show Tuesday night with a look at the case of Kim Davis, the Kentucky clerk who was released from jail earlier today following her refusal to issue marriage licenses to same-sex couples. At one point, during Lemon’s debate with Kentucky Republican gubernatorial candidate, and Kim Davis supporter, Matt Bevin he played part of a clip from The West Wing that has gone viral this week in response to Davis’ religious freedom arguments.

When Bevin accused fictional President Jed Bartlett, and by extension Lemon, of “selectively choosing” Bible quotes to demonstrate how out-dated a literal interpretation of Christianity is, Lemon shot back, “But that’s what she’s doing! That is the criticism of her.”

In turn, Bevin accused Lemon of getting “upset” and sarcastically said, “I appreciate your now theological expertise and I appreciate you sharing that with your audience, but the bottom line is this: What I have done as a guy running for governor is propose a solution whereby there’s equal protection under the law.”

“I have never heard one negative word, not one negative word from Kim Davis or any other clerks about homosexuals,” Bevin added. “All the violent commentary has come from the other side directed at her. And I would challenge any of your listeners and yourself to find evidence of anything being the other way around.”

Before ending the segment, Lemon told the candidate, “You don’t have to call people names in order to discriminate against them.”