Let The Wonky Win: Paul Ryan’s Magical ‘Get Out Of Lie Free’ Card 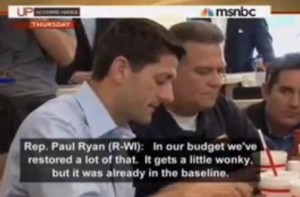 As America gets to know Mitt Romney running mate Paul Ryan, chiefly through the lens of a mainstream media that has shown itself to be enthralled by his supposed policy chops, it’s important that everyone involved take note of the way Ryan has already begun to exploit that enthrallment, using it like a pair of Wonder Woman bracelets to deflect tough questions. Alarm bells should go off every time Ryan has to implore an interviewer not to make him “get wonky” on them.

The first full week of the Romney/Ryan campaign hasn’t just been based on lies, it has been based on lies about lies. The chief lie is their attack on President Obama for “cutting/raiding/stealing” $716 billion from Medicare, when in fact, the President achieved savings for the government by eliminating insurance company subsidies and negotiating lower payment rates with providers, while expanding benefits to Medicare recipients. Those savings aren’t cuts, they’re reductions in spending growth. If gas prices rose to $5 a gallon, but not $6, you wouldn’t call that a “cut” in gas prices.

That’s a pretty big lie, and it’s one that the mainstream media treats as a matter of partisan point of view (“some say this, some say that”). What Romney and Ryan then do with that lie is pretend that their own budget plan doesn’t make the same “cuts/raids/thievin’ stuff,” while repealing things like the closure of the Medicare doughnut hole and expanded preventive benefits for senior citizens.

Fox News’ Brit Hume caught Ryan in that lie earlier this week, doggedly pressing him on the fact that both versions of his famous Paul Ryan budget plan contained the exact “cuts” that the Romney/Ryan campaign is attacking the President for. After hemming like a seamstress and hawing like Minnie Pearl (stick a pin in his “complicated baseline issues” dodge), Ryan seemed to be admitting that his budget used the Obama savings, but that Romney/Ryan would “repeal all of Obamacare,” including that savings. That’s what he said, right before Hume challenged him on when the Ryan plan would balance the budget, and Ryan raised the “wonky” shield:

Ryan went on to say that CBO estimates his budget would balance by “the ‘030s,” which isn’t all that complicated. Neither is the idea of a “baseline assumption,” the place you begin before you figure out how things you change in the law are going to work out. The baseline is the things you’re not going to change. Whoah, get me an ice pack for my head.

So, Hume exposed the hypocrisy of the “Medicare cuts” attack, but now that they’ve been caught, that’s it, right? Ryan said they’re going to repeal everything, including the savings, so they’ve reset to a consistent position, right? Otherwise, that means he lied again to Brit Hume’s face.

As it turns out, he did lie again to Brit Hume’s face. Campaigning in Ohio on Thursday, Ryan again had to explain how he could attack the President for the same thing his own budget included. “First of all those are in the baseline,” Ryan said. Yellow alert. “Second of all, we voted to repeal Obamacare repeatedly, including those cuts,” he continued. Orange WTF alert. If you voted to repeal those “cuts,” before and after you passed your budget, doesn’t that mean they’re no longer in the baseline? I’m no wonk, of course…

“In our budget, we’ve restored a lot of that,” Ryan says. So, he lied right to Brit Hume’s face. “It gets a little wonky (ding! ding! ding!), but it was already in the baseline.”

Let me get this straight, because I’m just not the wonky type, by which I mean a liar. Somebody does something you think is bad, like, say, stabbing Granny in the neck. You come along and say “Let’s get that knife out of Granny’s neck,” then explain that your plan is to re-stab Granny in the neck, but that’s okay because the knife in Granny’s neck was in the baseline?

Of course, the Obama savings were not a Granny neck-knife, but a way to save everyone some money while helping Granny pay for her prescriptions, and getting Granny checkups and whatnot. The Ryan plan is to keep those savings, roll them into tax cuts for people like Mitt Romney, and give Granny a coupon where her Medicare used to be. Well, not Granny, but the Granny of ten years from now. Today’s Granny just loses the prescription help and the wellness benefits.

When Ryan first gained prominence because of his budget, the political media fell all over themselves to give him credit (even liberals) for putting out a plan, while whispering, in the next breath, that the plan was horseshit. The VP announcement is playing out in similar fashion, with endless chatter about the “boldness” of the “wonky” choice, and how it will result in a “serious” debate. That narrative has worn away a bit as the week progressed, and Romney/Ryan withered under the light of sensicalness, but it’s still the baseline (where have I heard that before?) from which the political media proceeds. Whatever you think of Paul Ryan and Mitt Romney, there is no excuse for anyone in the news media uttering the phrase “campaign of ideas,” which has absolutely no meaning (it’s like saying “a book of pages!”). It becomes more galling when those ideas turn out to be horseshit, even when they lie about them.

Sarah Palin had the wink, Paul Ryan has the wonk. Now you know.