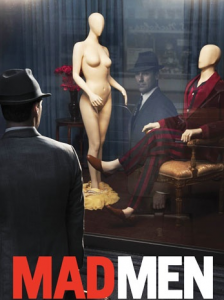 Mad Men premieres this Sunday, and I’ll be writing about its fifth season for Mediaite! I don’t think it’s an exaggeration to say that this is one of the most highly anticipated season premieres ever among fans of the show. It’s been a long (loooong) wait and everyone is eager to have these characters back on their TV screens, and being a fan of the show can feel, at times, like being a kid waiting impatiently for Christmas Morning. Are these impossible expectations for a show to live up to, even one as beloved and skillfully executed as Mad Men?

Yesterday, I was able to chat with TV.com’s Seth Abramovitch, who has been watching the first four seasons again in “The Great Mad Men Re-Watch,” about audience anticipation, the value of spoilers, and the ability of the show to sustain its current level of critical and fan adoration. Abramovitch has seen the premiere, and I have not, but if you are fearful of spoilers there’s no need — he was very careful not to let the cat out of the bag!

In “The Great Mad Men Rewatch,” you’re watching several episodes per week rather than one per week. Has that impacted how you view the show at all?

What was your experience watching the premiere, having such high expectations for the show?

The thing about the show is that it started from the pilot fully formed: it’s just a rare show that knew what it was and who its characters were and what it had to say from the pilot, whereas most shows take a few seasons to sort of figure that out and get their legs. So it started amazing, and it pretty much maintained that consistently all through the first three seasons. And then as it got to the fourth season it short of changed the game in a bold way that really paid off in that they started this new firm, they let go of some great regular characters; it just was the right change at the right time. And the show improved, you know? It somehow even got better.

The last three episodes I recapped…’The Suitcase’ and the two following were probably three of the best episodes in the first four seasons. So you have a show that’s somehow getting better every season, so the expectation is that it’s going to change considerably in the fifth season and get better in the fifth season. Um…

Those are kind of impossible expectations.

I think so. I think it’s hard to really expect that much creative output and for it to consistently stay there, but you know if anyone could do it Matthew Weiner could. He has the tools to do this.

[Matthew Weiner] has always seemed like he has a complete vision of how the show is going to play out, which I think is kind of a rare thing, and I think he has an idea of his endgame, and that’s kind of informed—

You know, I talked to him recently — I had an interview with him — and it wasn’t like he knows how it’s going to end, he didn’t say that – he said he had an idea of the actual image that it’s going to end on—

He said also that he writes toward a musical cue, so he’ll choose the song first and he’ll kind of weave all the threads of the peisod to end with this vision of the song playing, and an image – thats how he kind of works, he has a picture in his mind and he’s writing towards that. So I don’t think it’s like ‘Oh, I know exactly what’s going to happen…he’s working toward a feeling more than anything, you know?

Well, I mean, no one likes spoilers, right? When you’ve been made to wait close to 2 years for something, I certainly wouldn’t have wanted to be told, you know, what happened to everyone…so I can completely understand why he wouldn’t want spoiling, and a show like Mad Men – it’s not really about the twists, but there’s a lot of satisfaction in letting these things play themselves out at the pace that they’re supposed to play themselves out. So I respect that — the screeners came with a personal letter from him asking that journalists not talk about what happens, and I’m going to adhere to that.

I feel like Mad Men’s audience is so built in at this point…and I feel like that’s kind of a unique sort of loyalty that fans of the show have. I’m wondering if you think that that kind of devotion is sustainable?

In terms of the wait for the new season or the quality of the fifth season?

That’s a good question – I just think there are unrealistically high expectations of the show, with the Emmy awards it won, and it’s unfair to the show because even on a bad day it’s still better than 95% of other shows on a good day, so people hold it to a higher standard. And [Matthew Weiner]’s a perfectionist, and, you know, I think people will be very satisfied and happy to see everyone back…

Maybe there would be more of a sophomore slump?

Yeah…and you can say a lot in four seasons, so you start running out of things to say and places to take characters. So let’s hope that’s not the case!