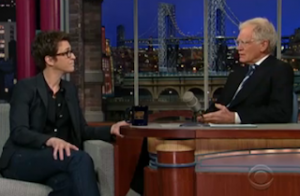 David Letterman had Rachel Maddow on the Late Show last night and he came out swinging against the “nonsense” he sees on the part of those who are still opposing gay marriage. He found a willing partner in Maddow, who agreed with his impassioned assessment and filled him in on the latest news in the same-sex marriage fight.

“I am just sick and tired, and I think it has crossed the line into nonsense — this ongoing, politically nuanced, religiously nuanced discussion of gay marriage and gay rights,” Letterman began. “It is absolute stupidity. Humans have the right to do what humans do. That’s it. End of story. There’s no argument. There’s no exceptions. Humans have rights, and they get to do what humans get to do. Case closed. Good night.”

Maddow nodded vigorously in agreement as the applause from Letterman’s audience died down before saying that Letterman had basically just summed up the argument made by the 131 Republicans who signed a brief to the Supreme Court saying “we don’t want government in the middle of this.” She also shared her hopeful view on same-sex marriage, saying that it appears to have become “sort of a wedge issue for Republicans, and Democrats are essentially almost unanimously in support of it.”

“It’s beyond embarrassing when you think about it now,” Letterman added. “Because it’s exclusionary based on what? Nothing, really, other than the fear people have generated of who knows what?” Ultimately, Letterman appeared to support same-sex marriage even more passionately than Maddow, demonstrating an outrage that rarely shows through his often indifferent posture on the Late Show.