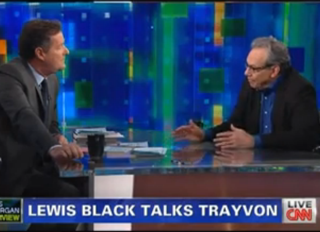 “You got so angry, you shook your microphone off… fortunately, your voice is so loud it didn’t make much of a difference,” Piers Morgan informed Lewis Black towards the end of his interview with the disgruntled comic. They chatted for two segments, on everything from how Black would solve America’s gun woes to why he isn’t particularly good at Tebowing and how hopeful he finds America when he goes on tour.

RELATED: Lewis Black Compares The GOP To ‘The Communist Party,’ Jokes They Are Having ‘Acid Flashbacks’

The conversation began with the killing of Florida teenager Trayvon Martin, a story in which Black did not see much justice happening. “You would think you shoot someone, that there has to be some kind of thing that occurs besides they take you in and read and ‘that works,'” he told Morgan, arguing there was a “process thing missing here.” He also found the problem to be that the neighborhood watch was acting independently, but admitted a greater national gun problem. “We have more guns than we do people, which is a really important step for the country,” he joked. With all the problems lined up, Morgan asked: “what can it seriously, realistically do?” “Billion dollar lottery, and you can only get a ticket by handing in a gun,” Black replied, deadpanning, “I guarantee they will do it.” The conversation shifted to the 2012 elections, where Black was not quite ready to make any predictions.

In the second half of the interview, Black and Morgan discussed some of the most irritating things the former has come upon, and he had more than a few words about how frustrating having Tim Tebow in New York was for him– not because of Tebow himself, but because of the New York media. “Don’t bring him to New York,” he griped, “we don’t need role models,” predicting, “we will be living on the edge of madness.” Among the problem children of the city? The New York Post, “which I purchase because it has the courage to print its own news,” who he argued “treat every moment in sports as if it is the pivotal thing.” Or course, with all the Tebow talk, Morgan asked if Black often got down on one knee. “As a Jew, it is very difficult for me to Tebow,” he joked.

The full interview via CNN below: