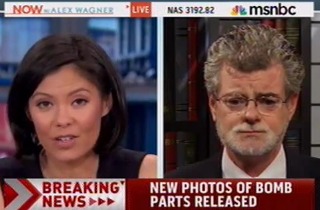 Mark Potok, a fellow with the Southern Poverty Law Center, appeared on MSNBC to discuss the rise of right-wing militias over the course of the Obama presidency in connection with the bombing of the Boston Marathon on Monday. He said that foreign nations view Americans as being “insane” for allowing hate speech to continue to be protected by the First Amendment to the Constitution.

Alex Wagner said that it remains unclear whether the attack on the Boston Marathon was perpetrated by foreign or domestic elements. “But the mere fact that both are being treated with the same amount of suspicion is a testament to the rapid rise in the number of home-grown extremist groups in the past ten years,” Wagner said.

She cited an SPLC graph which showed a spike in what she termed “conspiracy-minded, anti-government, quote unquote patriot groups” over the last four years.

“The culture of extremism is on the rise,” Wagner observed in her interview with Potok. “What do you ascribe to that?”

“I think the main driver of this growth is the election of our first black president and, more importantly, what that election represents,” Potok continued. He said that the projection that white Americans will become a minority by 2043 has contributed to the rise of extremist “patriot groups.” Potok added that the gun control debate “has raised the temperature even more.”

Potok later said that the First Amendment contributes to this condition, because anyone can stand up and say “what would turn our country into a Garden of Eden is to kill all the Jews, for instance.” He said that Europeans and Canadians view American protections on speech as “quite insane.”

Potok said that banning that speech was not an appropriate way, however, to combat the rise of right-wing militias. Rather, it is more appropriate to discredit their ideas.

“When you think about it, the target is not clear,” said Mark Potok, a senior fellow at the Southern Poverty Law Center. “What the target was not was the government, or the IRS, or a minority group—black people, gay people, Muslims, immigrants, Latinos, and so on. It wasn’t targeted at any sort of specific subgroup.”

Potok’s group came under fire last year when Floyd Lee Corkins said the SPLC’s decision to list the Family Research Council as an anti-gay hate group prompted him to shoot as many people at that organization as he could. Corkins was subdued by an employee who was the only person shot in the attack.