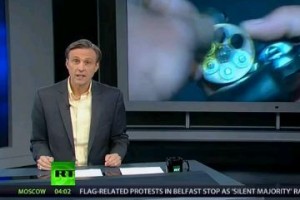 It’s a popular talking point with conservatives that the purpose of the Second Amendment is to act as a check on a tyrannical government, our own government. According to liberal radio and TV host Thom Hartman, though, the original purpose of the amendment was to act as a check on rebellious slaves, which might just put a kink in Gun Appreciation Day founder Larry Ward‘s theory about Martin Luther King.

On Hartmann’s The Big Picture with Thom Hartmann, Hartmann laid it out. “Gun-crazy America is arming up,” he said.  “While Vice President Biden and his gun task force think of ways to stem horrific gun violence in America – the shootings and the gun purchases keep piling up.”

“According to the Children’s Defense Fund, nearly 450 children and teenagers have been shot by a gun just since the 113th Congress was sworn in earlier this month,” he continued. “And thanks to the fear mongering going on in the gun community, assault rifles are fling off the shelves around the nation.”

After rattling off some gun-hoarding statistics, Hartmann went on to say “But I want to tell you something you don’t know about the Second Amendment ,something that’s been lost in the pages of history – that is very crucial to informing today’s current gun debate. And that’s this: The real reason the Second Amendment was ratified, and why it says ‘State’ instead of ‘Country,’ was to preserve the Slave Patrol Militias in the Southern States, which was necessary to get Virginia’s vote. Founders Patrick Henry, George Mason, and James Madison were totally clear on that…and we all should be too…Today’s Second Amendment is linked to our nation’s disturbing history of slavery. In the Beginning, there were the Militias. In the South, they were also called the ‘Slave Patrols,’ and they were regulated by the states.”

He goes on to play several quotes from those Founding Fathers, and it’s a bit complicated, but the basic idea is that an early version of the Constitution gave the federal government the power to arm and regulate state militias, which were used, in the South, to prevent and suppress slave rebellions. The Southern states worried that Northern abolitionists would use that power to either starve the slave patrols of arms, or free their slaves by inducting them into the military:

Now, after watching this, I wondered if Hartmann was just extrapolating that Patrick Henry, et al, were talking about slavery, simply by extension of the militias’ slave-suppressing duties, but no, they were actually talking about slave insurrections specifically:

The 10th section of the 1st article, to which reference was made by the worthy member, militates against himself. It says, that “no state shall engage in war, unless actually invaded.” If you give this clause a fair construction, what is the true meaning of it? What does this relate to? Not domestic insurrections, but war. If the country be invaded, a state may go to war, but cannot suppress insurrections. If there should happen an insurrection of slaves, the country cannot be said to be invaded. They cannot, therefore, suppress it without the interposition of Congress. The 4th section of the 4th article expressly directs that, in case of domestic violence, Congress shall protect the states on application of the legislature or executive; and the 8th section of the 1st article gives Congress power to call forth the militia to quell insurrections: there cannot, therefore, be a concurrent power. The state legislatures ought to have power to call forth the efforts of the militia, when necessary. Occasions for calling them out may be urgent, pressing, and instantaneous. The states cannot now call them, let an insurrection be ever so perilous, without an application to Congress. So long a delay may be fatal.

So, the next time some gun nut tries to tell you how great the Second Amendment would have been for slaves, tell him this story, and let him know that if there had been no slavery, there would have been no 2nd Amendment. Then ask him if he makes that trade.