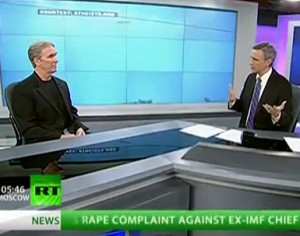 Radio and TV host Thom Hartmann cut against the popular misconception that liberals are “godless” by taking on Rick Wingrove, Virginia State Director for American Atheists, on Tuesday’s edition of The Big Picture. At issue was a 4th of July campaign that involved airplane banners that said “God-less America” and “Atheism is Patriotic,” a campaign which Hartmann sees as “evangelical,” and part of a pattern that, he argues, is no different than any other religion.

It’s a common stereotype that liberals are all godless commies. It’s true that there are atheists who are liberals, but for the most part, our attitude toward religion is do what you want, just don’t be a pain in the ass about it. The same holds true of atheism. Believe what you want, just don’t be obnoxious about it. Unfortunately, lots of atheists are obnoxious about it, and think that not believing in God automatically makes them smarter than everyone else. That’s why I enjoyed ultra-liberal Thom Hartmann setting the record straight on his show Tuesday night.

American Atheists (Atheists.org) organized an aerial banner campaign to get out the good news that the “good news” is all a lie, and while the organizers explain it as an awareness campaign, it sure looks a lot like proselytizing. Despite his support for separation of church and state, and for pushing back against the religious right’s notion that America is a fundamentally Christian nation, Hartmann gets ahold of the idea of atheism as religion, and won’t let go.

Hartmann points out that saying America is a secular nation is not the same thing as calling it a “God-less” nation, whereas it is quite similar to promoting any other belief system. Atheists are organized, evangelical, and have a belief system, Hartmann argues. The only thing he leaves out is the characteristic persecution complex, although as religious oppression goes, not winning an Emmy is pretty weak.

Wingrove disputes the idea that atheists have a belief system, and gets more than he bargained for. “We’re not actually seeing each other,” Hartmann tells Wingrove.”The retinas of our eyes are converting photons into electrical impulses that are converted into chemical impulses, and our brains are reassembling these things. We’re not actually hearing things, so how do you know anything is real?”

Wingrove responds, “Well, we just have to…” What? Have faith? “…assume we are actually here.”

Here’s the clip, from RT America’s The Big Picture with Thom Hartmann: