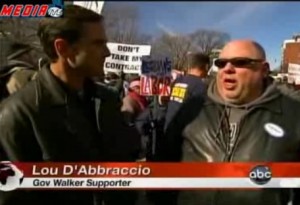 While the idea of a liberal or conservative bias in the media is a hotly-debated subject, viewers of Sunday’s This Week with Christiane Amanpour were treated to a stunning example of the mainstream media’s true bias, toward laziness and conflict. In a reported segment about the protests in Wisconsin, ABC’s Bob Woodruff blows it in reporting on Tea Party counter-protesters, creating the impression that there are two equal sides to a coin that’s actually a Krugerrand on one side, and a molecule-thin dime on the other.

Set aside, for a moment, the value of the phrase “but not conviction” (the same could be said of that crazy John 3:16 guy). What does “smaller in size” mean? 67,000? 6,700? Six or seven? Woodruff doesn’t bother to say, and while there are published reports that put the Tea Party contingent at several hundred, you would never get the idea from Woodruff’s reporting that the Tea Party crowd was orders of magnitude smaller.

Woodruff also says the crowd “came in from all around the state,” but fails to mention that they were bused in by Tea Party groups, despite the fact that he shoots part of his story aboard one of the buses!

Most egregiously, Woodruff interviews Lou D’Abbraccio, identified only as a “Tea Party supporter,” aboard one of the buses, and while he identifies D’Abbraccio’s opposite number in the report as a chemistry teacher, he never mentions D’Abbraccio’s occupation. D’Abbraccio is a business consultant and an official with the Racine County Republican Party, and a former campaign chair for the McCain Palin ticket. Chemistry teacher vs. political operative kinda changes the story a little, doesn’t it?

Finally, in the most comical part of this report, Woodruff says that D’Abbraccio “got an earful from the pro-labor crowd,” then shows a clip of the GOP official wading into the crowd (which is ignoring him) bleating “We won! Deal with it!”

Here’s the report, from ABC News’ This Week:

Bob Woodruff was in that crowd, he was on that bus, and he had a camera crew with him. There is absolutely no excuse for him not to have shared these facts, other than the desire to make this seem like an even exchange that it most certainly was not.

It’s about the way the certain facts of this story are omitted, thereby leaving a false impression that, in my view, obscure the truth. In this case, it appears to have been to make the conflict appear more even, and therefore, more dramatic.

Now, my friends at Media Matters would probably point out that there was no such effort, by the mainstream press, to amplify Tea Party counter-protesters, and they would be right to do so. I would chalk that up to the effectiveness of a decades-long campaign of “working the ref,” of attempting to de-legitimize traditional journalism with a constant drumbeat of “liberal bias” that gives the MSM a heightened awareness of anything that could corroborate the charge. While the result could be fairly called a de facto conservative bias, I think such a term misses the real problem. The laziness and thirst for conflict are products of a profit-biased media, one that has lost any pretense that it exists to serve the public.

Update: According to published reports, the other man interviewed by Bob Woodruff, Anthony Schnell, is the president of his local union, the Lodi Teachers Association.