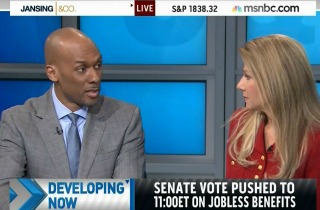 As national Democrats, led by President Barack Obama, head into the 2014 midterm election cycle, the writing on the wall looks bleak.

As University of Virginia professor Larry Sabato put it bluntly in POLITICO Magazine on Tuesday, the fundamentals governing this midterm election cycle — the president’s popularity, the economy, the candidates, and the seats in play — all suggest GOP gains in November. Just how many remains to be seen and can be greatly altered by events and candidate selection. But the general dynamic of this cycle is unlikely to change; the president’s party usually suffers in the sixth year of a presidency.

Augmenting this problem for Democrats is the fact that Republicans actually have an issue to run on ahead of 2014, the no-longer-abstract Affordable Care Act. Democrats are reaching to the point of flailing to elevate issues which could distract voters from their concerns about the ACA. They have, it seems, settled on one: inequality.

Democrats hope this seemingly perfect political issue – universally felt, easily digested, and historically intractable – will mitigate the losses they expect to incur in November by casting Republicans as an unpalatable alternative to Democratic governance.

The only thing that could derail this strategy is its own messengers. Political messages that appeal to emotion are often powerful and effective. Logical arguments only get political actors so far – appeals to the head must also have a component that charms the heart. But walking the line between expressing emotion and giving in to it is a tightrope, and one Democratic operative fell right off the wire on Tuesday when he attempted to frame the GOP as entirely unfeeling and uncaring.

When a Republican operative challenged CNBC contributor and liberal columnist Keith Boykin to explain why creating jobs not was a superior public policy objective compared with merely extending unemployment benefits indefinitely, he insisted that social safety net programs like unemployment “are how you create jobs.”

“This whole offset thing and paying for it is just a ruse,” Boykin insisted. “It’s designed to fool the people in the middle who aren’t paying attention, as if we didn’t know that Republicans were opposed to unemployment benefits all along.”

“So let’s have a one year plan then,” Boykin replied.

“Where’s the end of the road?” Nikpour asked. “We need job creation.”

“This is how you create jobs,” Boykin countered. “If you have more people getting money on a regular basis, they’ll start circulating that money into the economy and that creates more jobs.”

Boykin later apologized for letting his emotion get the better of him in this discussion, but the damage was already done. Given the polar vortex, it’s understandable that Boykin may want to keep warm by the light of the many straw men he set ablaze during this segment, but his logic is powerfully flawed and his arguments left much to be desired.

There are few outside of progressive think tanks that would attest to the notion that the miniscule demand created by the unemployed spending their benefits, who are themselves spending funds primarily removed from more productive sectors of the economy, are creating jobs. No one, despite Boykin’s frenetic assertions to the contrary, wants the impoverished to suffer, but a jobs agenda is simply antithetical to a perpetual jobless benefits agenda.

The emotional argument over the perennial problem of inequality advanced by Democrats will be tough for Republicans to navigate. No one, Republicans included, enjoys being cast as callous and cruel. But arguments like those advanced by Boykin are devoid of merit. A GOP job creation agenda, advanced unapologetically, will trump a benefits agenda.