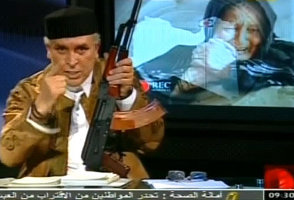 You’ve probably heard how there’s “A Slobbering Love Affair” between the mainstream media and President Barack Obama. You’ve probably also heard how “Fox [is]…a political operation.” Good news, though, if such differing views leave you paralyzed with doubt over who’s perpetrating the vast media conspiracy and who it benefits: neither represents what a real vast, crazy media conspiracy looks like.

No, for that, like much other craziness, we have to turn to Libya’s Muammar Gaddafi – specifically, a segment that recently ran on Libya’s state TV network. The anchor not only delivers a violently (as in, actually not-so-subtly threatening violence against anyone who dares defy his “dear leader”) pro-Gaddafi screed, but to really drive the point home, he delivers it while holding a machine gun. What does he say, exactly? According to the translation:

“I’m ready at any time – awake or asleep – to defend the country. This is our weapon. Who in the world can distribute arms to his people if he does not trust his people? Show me a man or a president in the whole world who dares to arm his civilian people if these people are not genuinely loyal to the leadership. In the name of almighty God, I pledge to you, my dear leader, that I will sacrifice my last breath, my last bullet, my last drop of blood, last baby and child for you. Nobody can touch you. We will not allow them to harm you, and you are too superior to them and more dignified than them. This is my message to those traitors, wherever they are, and I defy them.”

Makes, say, the sniping over federally-funded news organizations seem pretty harmless, no? Video below, via BBC.