Like Clockwork, Joy Reid Is Annoyed About Glenn Greenwald Sniping at MSNBC

Like Clockwork, Joy Reid Is Annoyed About Glenn Greenwald Sniping at MSNBC 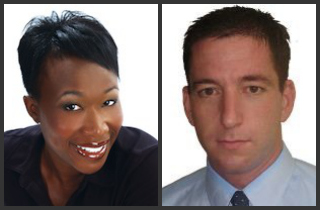 On Thursday afternoon, Glenn Greenwald appeared on MSNBC to discuss Edward Snowden‘s “alternative Christmas message,” but the interview took a tense turn when the journalist began hitting MSNBC for often being hyper-partisan defenders of President Obama.

And, like clockwork, MSNBC’s Joy Reid was irritated by it:

Like clockwork, Glenn Greenwald gets booked on MSNBC, only to snide MSNBC at the first sign of non-worship.

Speaking of sycophants, I do recall Reid being a frequent guest on a recently-ended MSNBC show which included conversation that, like clockwork, included the phrase “You’re absolutely right, Martin,” or some variation thereof:

When I wrote that article mocking Bashir’s show (and his guests) for engaging in self-congratulatory defenses of Obama, Greenwald made an observation then that still holds true about other shows on the network now:

One finds more vibrant political debate in the average conference room of the DNC than one does on Bashir’s show. It’s a staple of cable news that regular access to the show depends on one’s eagerness to agree with the host as much as possible, but Bashir lowers this dynamic to never-before-seen depths, where one is obligated not only to flatter all his views but he himself. Almost every segment is like watching parrots in a pet shop compete over who can more faithfully mimic the other. It’s really quite creepy.

And also, like clockwork, after reading this effective little bit of trolling, Reid will take to Twitter to lambast Mediaite as racist right-wing shills on par with Breitbart. Enjoy, Twitterverse.

UPDATE: And, like clockwork, she responds with a jab that makes no sense, considering we are a media site, and we often write about what media people say on Twitter about other media people, so… there’s that:

Just like clockwork, @andrewkirell cribs my Twitter feed for blog ideas… because you know, they're a "media" site.