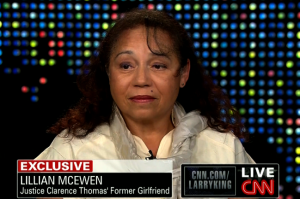 Ginny Thomas‘ olive-branch extension to Anita Hill regarding her decades-old sexual harassment allegations against Supreme Court Justice Clarence Thomas has brought the controversy back into the public eye. And wherever there’s controversy, there’s Larry King, who interviewed the Justice’s ex-girlfriend Lillian McEwen to discuss the matter. McEwen told King that even while she was dating Thomas, she assumed that he and and Ms. Hill were having “a sexual relationship.” She also said that Thomas would show her off to Hill, asking McEwen to “stand around in the office so that [Hill] would see and accept the fact that there was another woman in his life.”

Not that she liked it:

I hated going to his office. First of all, I was extremely busy. And secondly, the atmosphere in his — I had never been to his Education office, when he worked there. I had never been there. He never asked me to go there. The only reason I went to the EEOC is because he begged me to go there. He wanted me to make my presence known to Anita Hill so she would accept the reality that she did not have the same relationship with him that she had had at Education.

King, in his scrupulous hunt for the truth (or a soundbite), asked for McEwen to again confirm whether she thought Thomas and Hill were sleeping together, to which McEwen responded, “Yes.”

The full interview took place last night on CNN’s Larry King Live, but you can watch a clip below: