Limbaugh: ‘Absurd’ to Think Minority Voting Under Attack, ‘It’s Just the Opposite’ 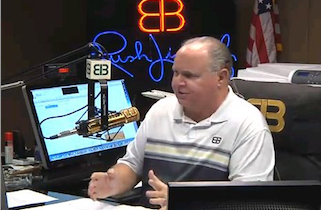 Limbaugh opened the segment by reading a portion of a report in The Wall Street Journal, a publication which the broadcaster said “bends a little leftward” outside of the editorial page.

In a report which examined Clinton’s “racial politics,” WSJ highlighted her recent focus issues like voting rights and criminal justice reform. The WSJ report suggests that Clinton is directing her focus towards issues that resonate with minority voters in order to maintain the Democratic coalition which prevailed during the Obama-era.

“In other words, they need to cheat,” Limbaugh declared. “They need avenues to voter fraud.”

“This why they are so opposed to photo ID,” the host added.

“The idea that there is an effort to squash minority voting is absurd,” Limbaugh continued. “It’s just the opposite. Everybody’s pandering to them”

“All of this is aimed at overwhelming an electoral system that can’t keep up with the fraud,” he concluded. “You could probably say that it is a wonder Republicans win anything.”

The conservative host concluded by saying that it was an “insult to intelligence” to assert that there is a concerted effort by some to restrict the rights of minority citizens to vote.