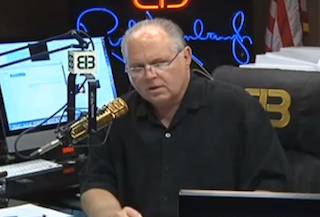 On Friday, conservative radio host Rush Limbaugh responded to the Wall Street Journal which criticized House Speaker John Boehner (R-OH) for bowing to the GOP’s talk radio constituency when he abandoned a recent push for immigration reform. Limbaugh said that President Barack Obama cannot be trusted to enforce border control provisions of an immigration reform bill and there is no mechanism available to Republicans to hold him accountable if he failed to perform his duty. “You can’t impeach the first black president,” he said.

Limbaugh warned his audience on Friday that a “constitutional crisis” could be imminent. He cited as evidence for this impending crisis the fact that some Democratic members of Congress are presently drafting executive orders for Obama to sign. “They are totally willing to grant dictatorial powers to one of their own,” the talk radio host said.

“He’s not obeying the laws we have now,” Limbaugh said. “What’s the next logical step in a case like this?”

“You can’t impeach the first black president,” Limbaugh observed. “No matter how corrupt or how lawless.”

He added that the president has embraced “lawlessness” in his lack of enforcement of the provisions of the Affordable Care Act. That precedent, he said, should be enough for conservatives to understand that Obama cannot be trusted to enforce immigration reform.