Limbaugh: Gay Marriage Supporters ‘Don’t Give A Damn About Rule Of Law Or Decency’
video

Limbaugh: Gay Marriage Supporters ‘Don’t Give A Damn About Rule Of Law Or Decency’ 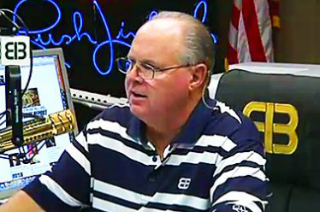 In the wake of Wednesday’s historic Supreme Court rulings regarding gay marriage in the United States, conservative radio host Rush Limbaugh tore into supporters of same-sex marriage. Limbaugh read Supreme Court Justice Antonin Scalia’s dissent in the case against the Defense of Marriage Act and praised him for identifying insults in the majority opinion directed at DOMA supporters. “It proves that we are up against people who don’t give a damn about the rule of law, or about decency, or about decorum,” he said.

“His dissent today in the Defense of Marriage Act ruling is breathtaking,” Limbaugh said of Scalia’s take on the Court’s verdict.

Limbaugh read Scalia’s scolding of his fellow justices for using language that “insults and demonizes” opponents of gay marriage in the majority opinion.

“Now, if you had any doubt that the left is intolerant and fully invested in the low art of personal destruction through smear tactics, just read Scalia’s dissent in United States v. Wade,” Limbaugh said.

“There’s no legal reasoning here – or very little,” the host continued. “Scalia says the majority has arrived at its point of view because the opponents of gay marriage are reprobates and bigots.”

He said that the animating force behind the modern left is defeating conservatives rather than principle.