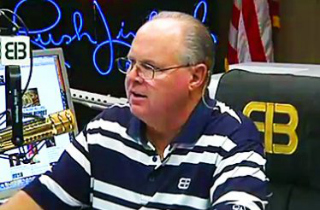 On his Friday radio show, Rush Limbaugh likened the Senate’s filibuster rule changes to a hypothetical vote in favor of allowing a room full of women to be raped.

Every now and then some lunatic in the group proposes to change the rule to allow women to be raped, but they were never able to get six votes for it. There were always the four women voting against it, and they always found two guys. Well, the guy who kept proposing that women be raped finally got tired of it, and he was in the majority so he said, ‘You know what, we’re going to change the rule. Now all we need is five.’ ‘You can’t do that!’ ‘Yes, we are, we’re the majority and we’re changing the rule!’ And then they vote, can the women be raped?

The point of this illustration, Limbaugh said, was that “When the majority can change the rules, there aren’t any.”

Listen below, via Rush Limbaugh Show: