Limbaugh: Obama Hid Golf Game With ‘One Percenter’ Tiger Woods Because It Would Confirm He’s Rich 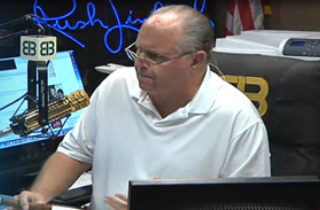 Conservative radio host Rush Limbaugh theorized on his Tuesday program that the press was not allowed to snap a picture of President Barack Obama playing golf with Tiger Woods because the president did not want to be seen enjoying the company of a wealthy athlete. Limbaugh said that a picture of Obama playing golf with Woods “just rams it down the throats of the middle class” that Obama is also rich.

“Tiger’s a one percenter,” Limbaugh said. “The fear of the photo op had nothing to do with the fact that Tiger’s had a whole bunch of different girlfriends.”

Limbaugh played a clip of CNN anchor Erin Burnett interviewing a former Obama administration official where she asked if the president being ashamed of his wealthy friends. “I think that we should be reporting on the sickening influence of money in politics, but I also think that is, unfortunately, the world we live in,” the official noted.

“See,” Limbaugh said. He mocked the notion that Obama spends time with wealthy individuals only because of the necessity of campaign fundraising.

“I think it’s safe to say, folks, that Obama’s now spent more time with Tiger Woods than he has with the Republican leadership,” Limbaugh said.