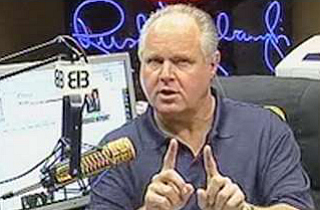 Conservative radio host Rush Limbaugh reveled in the slow death of legacy “dead-tree” newspapers on Tuesday. After noting that The Washington Post, The New York Times, and The Boston Globe had all, in some way, celebrated reports that he was preparing to break with his long-time syndication partner Cumulus Media, Limbaugh relished the fact that it was these papers that were in fact “fading away.”

“Looking at all these dead-tree news publications, and every one of them — The Washington Post, New York Times, Boston Globe — in the last two weeks they have all written extensively about my demise,” Limbaugh observed. “They’ve been denouncing me, they’ve been predicting my imminent demise while it is they who are fading away.”

Limbaugh sounded a note of caution, however, about the future of journalism noting that “the left owns Twitter.”

“Twitter, certain parts of it, have become a leftist cesspool,” Limbaugh warned. “So, for every newspaper demise, the people that work there are going to end up online doing the same thing that they do.”

Watch the clip below via The Rush Limbaugh Radio Show: