Rush Tears Apart GOP, Tells Them To Grow A Spine: I Don’t Want Compromise With Dems, ‘I Want To Defeat’ Them 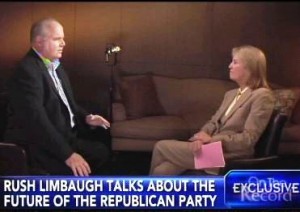 Rush Limbaugh spent some time during his Fox News interview Tuesday night slamming the Republican party for not listening to its conservative base enough. He told Greta Van Susteren that the Republican party is a little too complicit in conceding to President Obama on issue after issue, declaring that the party needs to put its foot down, stop the compromise, and understand they should be fighting to “defeat” the Democrats, not work side by side with them in harmony.

He said the real battle isn’t right vs. left but “Washington versus the rest of the country,” and while he didn’t want to speculate on the future of the Republican party, he found it baffling why Republican leaders, who aren’t “stupid,” are “agreeing with the Democrats on issue after issue.”

I’m about defeating them, within the political arena of ideas. I’m not talking about anything of a deleterious nature, just defeat them in the arena of ideas… Obama is about eliminating opposition, not working with it. So why should we help him? I think the Democrats are the people who need to be defeated. There’s nothing about what they believe that I want to compromise with. I want to defeat it.

He added, “[The U.S. is] hanging by a thread. We’re about to lose it. Why compromise with the people responsible for this?”