Lindsey Graham Has Decided He’d Rather Be Shot Than Poisoned 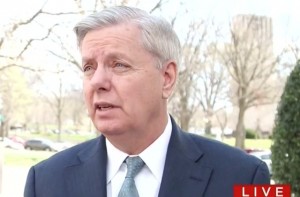 He has now officially settled on getting shot.

(Graham didn’t say, but let’s assume Trump is the poison here because of the whole “he’s poisoning the party and killing it from the inside” thing.)

Yes, Graham is getting behind Ted Cruz, someone who––just weeks ago––he made the following joke of: “If you kill Ted Cruz on the floor of the Senate, and the trial was in the Senate, nobody could convict you.”

Why is Graham supporting someone he clearly despises? Because, in keeping with our metaphor, he may have realized at least getting shot would be more immediate that the long-term poison currently leading in the delegate count.

And what’s even more amazing about this is that Graham doesn’t even think Cruz is the best alternative to Trump currently in the race. He said this to CNN’s Dana Bash earlier:

“John Kasich is the most viable general election candidate, I just don’t see how John gets through the primary… The best alternative to Donald Trump, to stop him to getting to 1237, is Ted Cruz.”

He isn’t officially endorsing Cruz, but he did say he will support his colleague in any way he can, even helping him fundraise.

Someone wanna might check air traffic over D.C. to see if anyone’s spotted pigs flying.