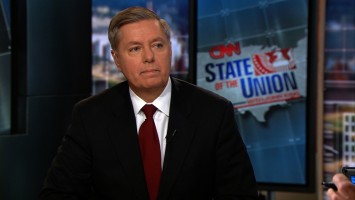 Now that the Democrats claim to have the 60 votes they need to pass health care reform, and the Republicans scramble for a last minute stop, the Sunday political morning shows were predictably overrun by talk of the Senate. On State of the Union, Senator Lindsey Graham of South Carolina was asked about the bill using a football metaphor and he took the opportunity to move the goal line, spinning a possible Obama victory into a long-term loss.

When asked about the Dems being on “the one-yeard line in the fight for health care reform,” Graham deftly pivoted on the question, first by stating that the House and Senate bills are “irreconcilable” and then, by making sure everyone knows that even if the bill passes, “they’re doing a lousy job governing the country.” The bill, he said, has become “an empty slogan” and “it’s really been replaced by seedy Chicago politics, when you think about it, backroom deals that amount to bribes.”

KING: You just heard David Axelrod. He says they are deep in the red zone at the one-yard line in the fight for health care reform. Can the Republicans mount a goal line stand or is the president going to get his bill?

GRAHAM: Well, our best player is the American people, so we’re in the fourth quarter. This is far from over. The House and Senate bills are in many ways irreconcilable. But you know, I like David. He ran a brilliant campaign, but they’re doing a lousy job governing the country, in my view. You know, change you can believe in, after this health care bill debacle is now becoming an empty slogan. And it’s really been replaced by seedy Chicago politics, when you think about it, backroom deals that amount to bribes.

And though Chicago has long been a go-to political metaphor for backroom dealing, the fact that it conjures President Obama’s political past doesn’t hurt one bit when it comes to 2010.

Host John King then pushed Graham to clarify his charges:

GRAHAM: Well, it is, oh, absolutely, it’s a strong word. It was meant to be strong; principled compromised — I mean, a compromise sold as a principled solution to an emotional problem like abortion that’s fallen flat; Enron accounting techniques — everything that people were upset with about Washington has gotten worse. And this bill personifies the worst of Washington.