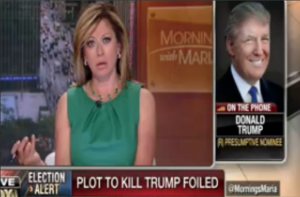 As the 2016 election clearly grows stranger and more heated, it can really make a person wonder how the candidates must be thinking whenever some drastic or alarming new thing happens. One window into that particular psyche was opened Wednesday morning when Donald Trump was asked to comment on the recent news that someone tried to kill him.

Trump has been an incendiary figure since his campaign began a year ago, and it has been reported that threats of violence against him personally have prompted him to wear a bulletproof vest at rallies. Today, during a conversation with Fox Business’ Maria Bartiromo, Trump was asked about a British teenager who was arrested at his Las Vegas rally after he tried to grab a police officer’s gun in order to shoot the real estate mogul.

Trump said that his Secret Service agents didn’t tell him about what Michael Sanford said during his arrest, and that he ended up finding out on his own while watching the news. On the whole, Trump didn’t actually seemed bothered by the assassination near-attempt as he offered his usual praise to the police and bodyguards who maintain order at his events.

Eventually, the discussion turned to the reports that Sanford overstayed his visa and therefore was staying in the US illegally. Trump used that point as a springboard to his usual spiel about how visa regulation is just one of the ways in which the immigration system is broken.