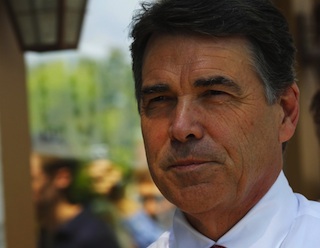 After disappointing showings in both Iowa (where his campaign dropped a whole lot of money) and New Hampshire, CNN reported today that Rick Perry will be dropping out of the race. Perry will be holding a press conference today at 11 a.m. EST in North Charleston, S.C., where he will presumably be ending his campaign. (UPDATE: And that’s just what he did. We’ve included video of the speech below as well as a transcript.)

“As I’ve stated numerous times during the campaign, this campaign has never been about the candidate. I ran for president because I love America. I love our people. I love our freedom and, matter of fact, this mission is greater than any one man.

As I’ve traveled across this great country, starting here in Charleston, going to New Hampshire, Iowa, California, down into Florida, numerous states in between obviously. I just covered this tremendous purpose, resiliency of our people. They’ve never lost hope despite the circumstances we find ourselves in. They haven’t stopped believing in the promise of America. They haven’t stopped believing in the American dream. Americans are down but we can never be counted out. We’re too great a people for that.

What’s broken in America is not our people, it’s our politics. And what we need in Washington is a place that is humbler with a federal government that is smaller so that our people can live freer.

I entered this campaign offering a unique perspective. A governor who had led a large state leading a nation in job creation. An executive leader who had implemented conservative principles. A son of tenant farmers who was born with little more than a good name but who has experienced the great opportunity and freedom of this country.

But I’ve never believed the cause of conservatism is embodied by one individual. Our party and the conservative philosophy transcends any one individual. It’s a movement of ideas that are greater than any one of us and will live long past any of us in our lives.

As a former air force pilot, I don’t get confused. I know we can’t lose track of the ultimate objective of carrying out our mission and that objective is not only to defeat President Obama but to replace him with a conservative leader who will bring about real change.

Our country is hurting. Make no mistake about that. Thirteen million people out of work. Fifty million of our citizens on food stamps. Fifteen trillion dollar national debt and growing. We need bold, conservative leadership that will take on the entrenched interests and give the American People their country back.

I have always believed the mission is greater than the man. As I have contemplated the future of this campaign, I have come to the conclusion that there is no viable path forward for me in this 2012 campaign.

Therefore, today I am suspending my campaign and endorsing Newt Gingrich for president of the United States. I believe Newt is a conservative visionary who can transform our country. We’ve had our differences, which campaigns will inevitably have. And Newt is not perfect, but who among us is?

The fact is, there is forgiveness for those who seek God and I believe in the power of redemption, for it is a central tenet of my Christian faith.

I have no question Newt Gingrich has the heart of a conservative reformer, the ability to rally and captivate the conservative movement, the courage to tell those Washington interests to take a hike if it’s what is in the best interests of the country.

As a Texan, I’ve never shied away from a fight, particularly when I considered the cause to be righteous. But as someone who’s always admired a great, if not the greatest Texas governor, Sam Houston, I know when it’s time to make a strategic retreat.

So I will leave the trail, return home to Texas, wind down my 2012 campaign. And I will do so with pride knowing I gave fully of myself of a cause worthy of this country. And I head home, I do so with the love of my life by my side, a woman who makes every day good when she is there by me. That’s my wife Anita. Honey, thank you for all you have done. She has been an incredible patriot during this process.

Also want to thank my son Griffin and his beautiful wife Meredith, Sydney who is not here with us today. But the fact is, with a good wife, with three loving children and a loving God who is in my life, things going to be good no matter what I do.

I’m proud of the policies we put forward to the American people and believe that we provided the right path forward for our party and our nation: overhaul Washington, providing that I think the road map for that. Proclaiming the tenth amendment and all the goodness of allowing the states to be more competitive in the local governments. Creating energy and energy security, creating jobs in energy security. Cutting spending and eliminating these unnecessary federal agencies. Cutting taxes to that flat and simple 20 percent.

And I’ll continue to fight for these conservative reforms because the future of our country is at stake and the road we are traveling today – President Obama’s road – is a very dangerous one.

I want to thank some wonderful individuals who I have come to know and admire and who have stood by my side in this state: Katon Dawson, than you brother for all the work you have done and…just being the loyal supporter you have done. A strong and good man in the United States Congress, Mick Mulvaney. Ambassador Wilkins.

I talked to all of them this morning and I just want to thank my supporters. Men and women who have come across the country to be here in South Carolina, that were in New Hampshire and Iowa. God bless you for loving your country, for volunteering and being here and making a difference.

And particularly, I want to say thanks to Governor Bobby Jindal, who has just been a fabulous spokesperson, Steve Forbes who, as I know him more, I admire him greatly. What a fabulous patriotic American. And Governor Sam Brownback, Senator Jim Inhofe, Congresswoman Candice Miller…Congressman Sam Graves. All just great Americans who we have come to have such great respect for and reflect their love of country.

And I want to say a really special thanks to three distinguished veterans who have joined me on the trail: Medal of Honor recipient Mike Thornton. Mike spent the last two days with us as we traveled acoss South Carolina. Navy Cross recipient Marcus Luttrell. Thank you brother. I appreciate you…coming and being with us here today. And my Christian brother who’s up in Greenville and who has traveled so many miles with me, Gun Marine Captain Dan Moran. They truly represent what is best about America. Who give so much of themselves and they have been uplifting for me as a citizen, as the commander and chief of our Texas forces and they are truly my heroes.

You know I began this race with a sense of calling. I felt led into this arena to fight for the future of this country. And I feel no different today than I did then, knowing a calling never guarantees a particular outcome, but the journey that tests one’s faith and one’s character. So now the journey leads me back to Texas, neither discouraged nor disenchanted, but instead rewarded highly by the experience and resolute to remain in the arena and in the service of my country.

Our country needs bold leadership and real transformation. Our country deserves that. We must rise to the occasion and elect a conservative champion to put our nation back on the right track.

And this I know, I’m not done fighting for the cause of conservatism. As a matter of fact, I have just begun to fight.