Liz Cheney To Hannity: Best You Can Say About Obama Is He’s ‘Unacquainted With The Truth’ 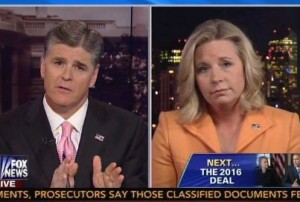 Liz Cheney slammed the Obama administration tonight on Sean Hannity‘s show for seemingly having a lax policy on making sure everyone is honest and forthcoming. While she did give Jay Carney some benefit of the doubt over Darrell Issa‘s “paid liar charge,” Cheney remarked that the best thing you can say about President Obama is that he’s “unacquainted with the truth.”

Cheney admitted to Hannity that Carney’s “in a very tough position because either he is unaware of the truth and is unknowingly telling lies by the administration or he is in the know, but either way, “his credibility has been severely damaged.”

RELATED: Coulter And Hannity Tear Into Obama Admin. For Systematic Targeting Of Conservatives And Fox

Hannity brought up the 150+ White House visits by former IRS commissioner Douglas Shulman and how there hasn’t been any actual explanation yet. Cheney acknowledged there’s “something very fishy going on, adding that the Obama administration wouldn’t have been targeting conservatives in the first place “if they weren’t worried about our power… to interfere with their plans for the nation.”

She took the president to task for his “arrogance,” and stated plainly, “It doesn’t seem to matter to him if the people who work for him lie.”

She said Eric Holder is only in danger of losing his job because he’s become a “political liability” and up until recently the White House’s mentality was, “So what if we get caught? We’ll get away with it.”