Fox’s Liz Trotta Clarifies Remarks About Women In The Military 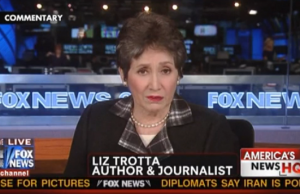 Last Sunday, Fox News’ Liz Trotta made several inflammatory comments about women in the military; stirring up the ire of Jon Stewart and countless pundits. Yesterday, Trotta was back on Fox News, given a chance to clarify her comments and explain what she meant. She took the occasion to blame feminists and the New York Times for pushing the ideas she was speaking out against.

“This is a subject that has never gotten a fair and open hearing either in the national media or in Congress,” Trotta said, reading from a prepared statement. “The political correctness infecting the Pentagon has resulted in silly and dishonest fairy tales about female heroism. Has anyone forgotten the Jessica Lynch story?” Trotta said that, “by all accounts, including her own,” Lynch was not mistreated. “Yet the Pentagon saw fit to send in the SEALs to rescue her from a hospital in a videotaped operation that seemed headed straight to Hollywood.”

Trotta then added that, “there are countless other stories of fake heroism or exaggerated prowess in which women are the stars, many of them tailored for the New York Times and its agenda to promote militant feminism no mater what the truth.”

Later in her appearance, Trotta noted that:

The military is not a social services operation, or a testing ground for gender wars. It is a fighting machine. Women are not as strong as men. Their instincts and reactions in crises are markedly different. There’s a reality the left will not face: biology is not destiny.

“I certainly did not say all military men are rapists,” she added. “I believe that the environment of combat, by definition, sets up the situation where basic instincts rule. Any scientist will tell you that testosterone rules.”

Watch a clip of Trotta’s interview below, courtesy of Fox News:

Watch her original remarks below: