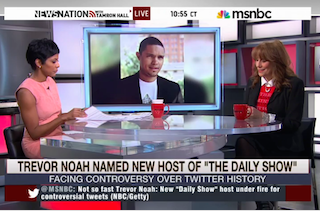 As the internet preoccupies itself with Trevor Noah’s history of borderline offensive and often not-very-funny jokes on Twitter today, The Daily Show co-creator Lizz Winstead visited MSNBC to give her take on Jon Stewart‘s successor. Asked for her “gut reaction” to the decision, Winstead said, “Thank God it’s not a white guy.”

“I just wanted to have a wide swath of a different kind of lens in The Daily Show,” she elaborated, adding, “A woman would have been awesome too.” After seeing his initial appearances as a correspondent on the show, Winstead said she was “psyched” for his potential.

As for Noah’s controversial tweets, Winstead, who was part of the The Daily Show before the Stewart era, opted to neither defend nor denounce his words.

“This is an era of comedy now where whatever you say matters and Twitter is for the record,” she said. “And he’s going to get a little bit of a taste of what it’s going to feel like to be in the public spotlight every single day.” Winstead offered Noah the same advice she says she would give to any comedian: “When you tweet it, when you say it, make sure you can back it up.”

After the MSNBC appearance, Winstead responded to one follower who may have taken her comments a bit too literally: