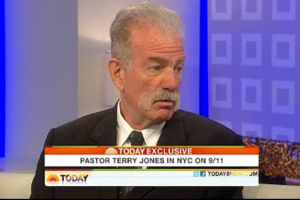 The local Gainesville, Florida pastor who won his Warhol-esque 15 minutes by making public his arsonist tendencies and threatening to burn the seminal texts of one of the world’s largest religions decided to show his face in New York on September 11, making an appearance on Today this morning with a sidekick. He promises not to burn any Korans, but still has a problem with the “Ground Zero” “Mosque,” and would like some face time with Imam Feisal Abdul Rauf.

“We have come here with the hopes of speaking with the Imam,” the pastor tells NBC’s Carl Quintanilla, explaining also, that his church has decided “to cancel the burning. We feel that whenever we started this out, one of our reasons was to show, to expose that there is an element of Islam that is very dangerous.” He goes on to tell a story about Abraham and insist in his belief in the existence of Sharia Law. He also explains that his gesture of not burning the Koran is an act of good will, and that “making the first gesture of not burning the Koran… we hope that through that, we will be able to open a way to talk to the Imam.” Yes, his “first gesture” is to not do something pointlessly offensive, distasteful, and fairly time consuming.

Quintanilla then goes for the $64,000 question: “was all this for publicity?” Absolutely not! “We were completely convinced that this was a type of mission. We believe that there is Sharia Law,” he responded. In other words, this interview is everything you need to know to realize that Mika and Joe were right.

Some of the more self-righteous elements of the media like to criticize famous-for-being-famous media personalities like Snooki and Levi Johnston for being a completely useless and distracting the media’s attention from more important issues. Those “more important issues” are sometimes people like this pastor, who has proven to be little more than a real-life manifestation of an Onion headline (“Area Man Enjoys Burning Books”; alternatively, “Some Bullshit Happening Somewhere“). Sure, Snooki and Levi and Kim Kardashian or whoever else falls into that category actively burn our brain cells by existing, but at least they deserve points for being upfront about wanting fame for fame’s sake. Cowering behind God to achieve the same goal shouldn’t excuse this pastor.

His interview on this morning’s Today on NBC below: